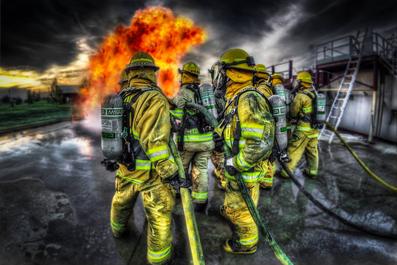 I am no different than any other than any other Canadian firefighter. I watched with alarm as the wildfire nicknamed "the beast" forced Fort McMurray's 94,000 residents from their homes over the past two weeks. I was the fire chief of a small town, British Columbia -- a small town 120 kilometres southwest of Calgary and fought fires in Alberta and know many of those people battling the massive blaze.

For more than a year and a half I have been unable to work because of post-traumatic stress disorder (PTSD), a mental injury, an invisible injury, by exposure to trauma involving death or serious injury, according to the Canadian Mental Health Association. WorkSafe BC has a very different set of criteria one needs to meet. I have a warning or advice for my comrades fighting the beast.

You must believe that you are doing everything

you can to make it better, it’s a disaster that's of

none of your making -- but it's going to impact

you, maybe today or maybe years down the

road. It will leave an imprint on your mind

You need to be able to talk to your teammates,

to express your feelings, and allow you

and each other to both feel what they feel, and

that it is okay.

Unlike Alberta, Ontario, New Brunswick, Manitoba and now Saskatchewan who all have passed a law that presumes emergency responders will likely experience trauma and ensures they get speedy support and help from the Workers' Compensation Board. I can't remember how many times I've said, 'I wish I had my breakdown when I was living in Alberta,' BC refuses to accept the responsibility of understanding that a first responder's job plays a huge role when they are diagnosed with PTSD. So, when the BC Liberal government keeps quoting we have a section (5.1) for mental health injuries, it works great if you are among the general working public because if you see a fatal car accident, of course it will be shocking.  First responders are apparently supposed to have unbreakable spirits and a brain of steel. We don't, it can just take a smell and suddenly....everything you have ever seen, smelled, heard, felt.......

If you're a first responder in B.C., you're screwed. WorkSafe BC denies 95% of our claims, why is that?

A private member's bill that would bring the same "presumptive" approach to B.C. was before the Legislature but our Government shot it down. Alberta has had a presumptive clause for PTSD since 2012; Manitoba adopted a similar amendment last June, and so it goes for 50% of Canada. Private member's bills rarely pass, and change can't come fast enough for me.

Stigma kills first responders; our guys are still killing themselves. But the more we speak out, the more acceptable it is to seek help.

You are not Alone...